skip to main | skip to sidebar

Michael and I phoned Dr. Holden yesterday to check in. He said if we don't go into labor naturally by Monday night, we should head to the hospital on Tuesday to be induced. He'll be on call that day and will be with us throughout the day.

Several friends have given Michael or me recommendations on things to do to bring on labor, ranging from eating spicy food, walking, and having sex to "bouncing her ass down the stairs" (Australian colleague at work).

Planning to skip the last suggestion. None of the others have worked so far.
Posted by Sisu at 8:18 AM No comments:

Due Date: Come and Gone! 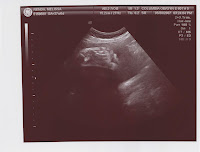 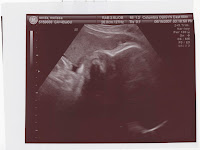 We had a sonogram yesterday, Friday, June 15th, our due date. This is a standard procedure at the 40-week mark, and it's called a BPP (biophysical profile) to monitor fetal heart rate continuously for 20+ minutes, check the reflexes of the baby, measure amniotic fluid levels, etc.

According to measurements taken yesterday, the Bean is already 8 pounds, 8 ounces! The baby gains almost half a pound each week now.

The due date is the midpoint of the last 4 weeks of the pregnancy. Roughly 5% of pregnant women deliver on their due date according to Dr. Holden, and the rest come earlier or later. Senan (Emma's son) was born 5 days after his due date, Ben and I came after our due dates, and Bean is carrying on in the Renda tradition of being late.

It's funny to think I actually look forward to cramps and backaches. My parents and Michael ask "How are you feeling?" and I say "perfectly fine, unfortunately", and we all laugh. Ready to have the baby out now.

We saw the Bean's face and head even though it's down low. The radiologist said the Bean was making chewing/sucking motions. I hope that bodes well for breastfeeding attempts after the birth.

I find it emotional and difficult to look at our ultrasounds. We saw outlines of the external features, and the skeletal structure underneath, and he/she still looks like ET (!). I love the baby already whatever he'll/she'll look like, so I just want the radiologist to look on my behalf and tell me/us everything is ok. She said everything looked fine.

It is easy to get anxious at ultrasounds. Even though we had genetic testing and blood tests early in the pregnancy, there are a million other developmental issues that can happen along the way that can't be tested for in advance, that are unrelated to age and are out of the parents control (including things like cleft palate) so you find yourself shoving these worries to the back of your mind, hoping for the best, and watching the face of the radiologist very closely to insure he/she doesn't get a concerned look...

Last night, my parents and Michael and I walked to a restaurant in North Park Slope called the Chip Shop -- it's modeled directly on the UK Chip Shops and features meat pies, fish and chips, curry and chips, chips & butty, bangers & mash and more. We had great fish and chips and Michael tried a fried Mars Bar, which is a candy bar deep fried in batter (a donut!) covered in powder sugar. Heart attack on a plate. It reminded me of living in England.

We walked home and I had cramps for the rest of the evening, so we all went to bed optimistic that this might be real labor starting, but I fell asleep around midnight and woke up 8 hours later, so obviously it wasn't...

Today is my father's birthday! We were hoping the Bean would be born today, but unless something dramatic happens this afternoon, probably not. Mom made lamb chops for dinner, we had birthday cake and gave Dad a few presents. I'll post a picture here soon from our party of four (+1).

Above are two pictures from the two recent sonograms we've had - it shows the outline of Bean's head (June 15th), and one of Bean's feet (May 30th).
Posted by Sisu at 7:50 AM No comments:

We saw Dr. Holden today, and for the first time I was looking forward to him checking me out to see if I'm dilated (even though it hurts a bit). Was hoping that the cramping this week was a sign that things are moving along here. This is expected to be our last doctor visit before the birth.

He said I'm dilated ~2 centimeters and softer than last week, which are good signs but not necessarily indicators that we'll go into labor naturally soon, so I am a little disappointed. The cramps have diminished so doesn't seem like much is happening.

Our official due date is the day after tomorrow (Friday, June 15th). As per the discussion we had with Dr. Holden at last week's appointment, the latest we'll be allowed to wait for something to happen naturally will be next Thursday, June 21st. Since Dr. Holden is on duty next Tuesday, he recommended we formally book in to the hospital on Monday, and he'll deliver us either Monday or Tuesday (!). We can opt to wait until Thursday; the downside is we probably won't get Dr. Holden.

Michael and I would both like it if we went into labor naturally, so we're hoping something happens this weekend (but right now, it doesn't feel like much will happen...). We are scheduled to show up at Columbia Presbyterian next Monday at 6 a.m. eastern if nothing develops this weekend.

Dr. Holden said it would be normal to spot or cramp up after the appointment. After dinner, I went to the bathroom (pee), and found something weird in the toilet. Sort of light brown and scalloped... I called my Mom in and we both looked. Maybe mucous plug?
http://www.justmommies.com/articles/mucous-plug.shtml
Not sure, but hope that's what it was.

Some of the best laughs Michael and I have had this pregnancy have been around bathroom issues in the last trimester. One incident (#2) happened at the old apartment; and another incident (#1) happened at a recent doctor visit when I was trying to provide a urine sample. I'll write separate entries later with a warning up front in case anyone wants to be spared the bathroom humor. It's worth recording to me because it will capture at least two times Michael and I couldn't stop laughing recently. The closer the due date, the less the dignity...
Posted by Sisu at 7:37 AM No comments:

Today is Monday, June 11th, and I've had cramps on and off since Sunday early morning (the 10th). Until yesterday, I felt no contractions, cramps or other discomforts, but today the cramps are increasing in frequency and in level of discomfort. My mom and I spent the morning doing laundry and rearranging beds and this afternoon, we went to a day spa to get massages. Mine was ok -- I'm crampy on and off every 10 minutes or so, and it is distracting, so I didn't enjoy it as much as I would if I wasn't pregnant.

My mom and I feel this development is probably a good thing -- hoping things are happening down there. Am assuming the cramps are related to starting to dilate/efface, which is good news. I'd rather go into labor naturally than run past due date and get induced, so maybe this is a sign that things are on their way.

Dr. Holden is on call tomorrow (Tuesday) and this coming weekend... if Bean doesn't come tomorrow (and comes on Wed, Thurs or Fri), then I'll probably be delivered by one of his colleagues If I cramp up every day until the weekend, it will make for a very long week at this rate, but the upside would be that Dr. Holden will deliver for us...
Posted by Sisu at 3:17 PM No comments:

Weight: 181
Vitals: 120/60
Fetal heartbeat: good
Michael and I met Dr. Holden today. Our due date is next Friday, June 15th, so we're about 9 days away, though only 5% of women deliver on their actual due date -- roughly half go early and half go later.

Urine, blood pressure, weight and fetal heartbeat tested -- all fine. We asked what happens if we go past due date and there's no development, and Dr. Holden said the policy across different hospitals varies, but at Columbia, they won't let the baby come more than 1 week late (week 41). There's evidence that the probability of fetal distress increases dramatically between weeks 41 and 42 and beyond, so they'll induce labor after one week past the due date. Since Dr. Holden is on call Tuesdays and the weekends, if the Bean doesn't arrive naturally the weekend of the 16th/17th (due date), then we may induce on Monday, the 18th, with the expectation I'll deliver on Tuesday, the 19th when Dr. Holden is on call.
He did a quick internal exam and said I'm approximately 1 centimeter dilated and cervix is much softer than when he last saw me two weeks ago. We'll see him again next week...
Posted by Sisu at 3:38 AM No comments:

Sisu
2006 was a busy year. Got engaged in January, turned 40 in February, got married in September, and discovered I was pregnant in November. This is a journal of our experiences during pregnancy that the Bean might someday like to read.